Staying awake at work has been a problem since the beginning of work.

So, it’s not surprising that an array of anti-somnolence work-arounds have been tried over the millennia. Chemical stimulants have been popular since the discovery of caffeinated plants such as tea and coffee over 2,000 years ago. In the last century more potent drugs became availabe: In 1951 Jack Kerouac began an amphetamine-fueled marathon by feeding a continuous scroll of paper into his typewriter; three weeks later he’d finished his magnum opus On the Road. College students still rely on drug driven endurance runs but now have the advantage of more selective drugs such as Adderall. And it’s not just students: the famed mathematician Paul Erdős is said to have worked nineteen-hour days, energized by Ritalin, strong espresso, and caffeine tablets. “A mathematician is a machine for turning coffee into theorems” he observed. And it seems to have worked: Erdos published over 1,500 mathematical papers, more than any other mathematician1.

Pain is perhaps the easiest way to quickly increase alertness; hardly any sleepy driver hasn’t tried pinching him or herself to make it safely to the next rest station. And a bit of discomfort as a wakeup has a long history. Drowsy Zen monks relied upon a supervising monk who would strike any nodding head with the keisalzu, a 3-foot-long oak stick. In circumstances where a supervisor wasn’t available classical Chinese students tied their queues to the ceiling as an “automated” way to prevent dozing off2, a practice that still continues today3. 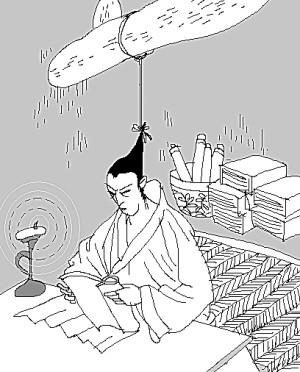 But is sleep really the enemy?

The idea that sleep is a foe to be defeated with drugs or other workarounds is an odd one, however, because sleep is essential. Consider this: all animals sleep, even though sleeping puts an individual at grave risk of being eaten by a predator. As the eminent sleep scientist Allan Rechtschaffen observed: “If sleep doesn’t serve an absolutely vital function, it is the biggest mistake evolution ever made.”4

And we don’t need evolutionary arguments to see that sleep is essential: simply depriving rats of sleep for two weeks is fatal. Within days of total sleep deprivation rats begin losing weight despite eating more, as their heart rate and energy expenditure increase. The animals soon become debilitated, emaciated, and ultimately succumb. Total sleep deprivation in humans as a result of a prion disease (“fatal familial insomnia”) is a rare condition that is also fatal within months.

Sleep isn’t just essential for survival, adequate sleep is essential for health: humans deprived of sleep have impaired cognition as well as mood swings; neuroendocrine changes ensue, along with increasingly frequent “microsleeps” (temporary loss of consciousness), which in our mechanized world can prove fatal. Plus, being exhausted just feels bad.

Sleep may be essential, but we aren’t getting enough of it

We Americans work a lot, almost 1,800 hours each year, more than almost any other industrialized country. And we take far less vacation than other nations. Unfortunately, our extraordinary capacity for work has made us one of the most sleep-deprived workforces: one-third of Americans sleep less than the recommended5 7 hours per night, and the US Department of Labor tells us that over 40% of Americans say that they are sometimes too tired to function safely at their job6. Workplace exhaustion isn’t just expensive ($136 billion/year); it can be dangerous: 13% of workplace injuries are attributable to sleep problems7.

All this has led to a ‘drowsiness at work’ epidemic. So, it’s surprising that recommendations for actually dealing with drowsiness seem so shopworn and mundane: go for a walk, talk to a coworker, turn up the lighting, turn down the thermostat, have a snack, splash cold water on your face, get more rest, … The list is predictable, but almost entirely free of any scientific research. Curiously, sleeping at work is not on the list: it’s not just frowned upon here in the USA, it can get you a pink slip8. But if the problem is lack of sleep, wouldn’t the solution napping?

Other cultures have approached the problem of workplace drowsiness more directly: if you’re sleepy, perhaps you need to sleep. In Japan, napping at work is fine because it’s felt to show a commitment to getting the job done. The inemuri9 (power nap, a mash-up of the words for being present and sleeping) has been a fixture of Japanese culture for over a thousand years, but seems well suited to our current infatuation with long office hours. In China the right to nap at work was written into the constitution (Article 43)10. And napping at work may be an idea whose time has come, as Europeans discover the advantages of, if not sleeping on the job, at least sleeping during office hours. Nap bars11 are beginning to proliferate.

Sanctioned napping at work in the USA hasn’t yet arrived, and it may be a while yet before it does. Until the US embraces napping at work there are two recommended workarounds that are both physiological and practical, but in practice aren’t easy to implement.

Getting more sleep is the obvious first choice, but seems out of reach for many in a world of expanded obligations and constant connectivity. You’re probably reading this because you’re behind on sleep.

Going for a walk is also a great way to increase alertness; no one ever feel asleep while walking. Plus, walking provides a panoply of health benefits. Unfortunately, it’s hard to stay productive while walking, and not every office environment makes it easy to go for a stroll. The idea of “walking while working” seems like the obvious solution, but marrying a treadmill to a standing desk hasn’t proved popular: just too much effort, too expensive, too noisy, and, well, just a little too weird.

So, wouldn’t it be great if you could walk while sitting? Well, you can, sort of. So called active chairs are now available that encourage, actually require, continuous muscular engagement, much like walking while sitting. Evidence so far is anecdotal, but folks who sit on active chairs report feeling more alert: “I don’t need my mid-afternoon espresso anymore” said one analysist at Morgan Stanley. And the money he saved at Starbucks ($20/week plus tip) paid for his active chair in a just the first quarter…

Human alarms have also been a go to solution. Monks copying manuscripts in the monasteries of Europe were kept alert by the armarius (“provisioner”) who supervised the monks and kept an eye out drooping eyelids. In the 21st century this approach has been updated with keystroke monitoring programs that keep track of employees moment to moment. But, wouldn’t it be better to to support workplace energy and alertness in ways that are more natural, less invasive, and frankly less creepy? So, stretch a bit more, sit a bit less, go for a walk if you can arrange it. The 21st century may require most of us to sit, but it doesn’t require us to sit badly.

1What’s with the name?

5Recommended Amount of Sleep for a Healthy Adult: A Joint Consensus Statement of the American Academy of Sleep Medicine and Sleep Research Society

6Workplace Fatigue Is Nothing to Yawn At

8How to stay awake and alert at work

9“Inemuri,” the Japanese Art of Taking Power Naps at Work, on the Subway, and Other Public Places

10Do Americans Still Detest a Siesta?

Can Fidgeting Help You Live Longer?

Can how you sit help lower your cancer risk?